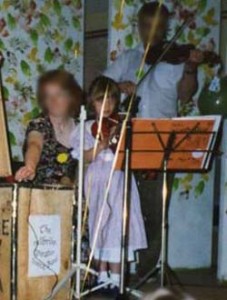 Coming from a musical family, Alison was surrounded by music from an early age and clearly remembers listening to The Poozies and Dvorak’s New World symphony during many Sunday lunches. After pestering her parents for three years she was finally given her first violin for her sixth birthday, and made her debut performance at a barn dance three weeks later, – playing open strings, of course – with her petticoat showing beneath her pink dress.

Rather than fleeing from this embarrassing (and well-photographed) memory, Alison has since leapt at every vaguely musical experience to come her way. During her school years she was classically trained in the violin, piano, voice, and – briefly – the euphonium, played in countless orchestras, and started composing music. Her chamber work Journey’s End was selected by the SPNM (now Sound and Music) to be performed at LSO St Luke’s, London, in 2005 as an example of the best in youth music.

Alison began her Music degree at the University of Cambridge in 2006. She was quick to embrace the musical life of the university, playing in orchestras, choirs, and numerous folk ensembles. She was a member of the Cambridge University Ceilidh Band throughout her time at university, and spent two years on the committee – first as Tour Secretary, then as President. It was at CUCB that Alison met the future members of her folk quartet Run of the Mill (now a quintet and renamed Mrs Trevor’s Deep Freeze Secrets), and many members of Alison’s Cambridge-based ceilidh band The Cunning Plan.

She also sang in an informal a capella folk harmony group called A Hair’s Breadth. They performed at many events in Cambridge, including three May Balls, and were finalists in the 2009 New Roots competition, two years after Run of the Mill became finalists in the same competition.

Whilst at university, Alison also began to gain more teaching experience. She ran rehearsals for the Cambridge University Ceilidh Band during her year as society president. In 2007 she was hired by Artension as a music workshop tutor to assist in delivering a Spanish Week arts project in Gloucestershire.

Since graduating, Alison has been working full time as a self-employed musician, instrumental teacher and workshop leader.

Her regular instrumental teaching has included one-to-one private lessons, small groups in schools and Wider Opportunities classes. She ran the Folk and Ukulele bands at Rainbow Music for two years, giving (mostly) adult instrumental students an introduction to ensemble playing, and often to folk music and ukulele as well. 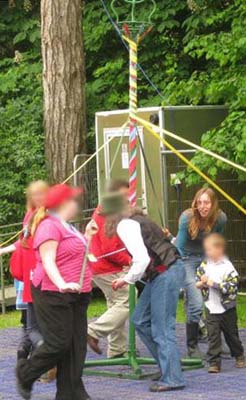 Alison is a tutor for Shooting Roots, providing music workshops for young people at folk festivals. She is project leader for Cambridgeshire Music’s two-year Ultimate Ceilidh Band project for young people in Cambridgeshire, supported by Youth Music. Alison is also a tutor for the English Folk Dance and Song Society (EFDSS), running folk taster projects for instrumental students in London. She also runs one-off workshops – these have included how to survive in sessions, tin whistle for beginners, maypole dance and harmony singing.

Alison regularly plays and calls with several professional ceilidh bands, including the Bristol Ceilidh Quartet, Licence to Ceilidh and the Cunning Plan Ceilidh Band. She has played in numerous orchestras, often as leader of 1st or 2nd violins. In 2012-13 Alison was a Creative Artist in Residence for the English Folk Dance and Song Society at Cecil Sharp House, London. She was commissioned to write an orchestral fantasia of Cotswold Morris tunes from the repertoire of the Beaux of London City Morris Men. Morris Monday was premiered with Alison as conductor at Cecil Sharp House in March 2013.

From time to time Alison likes to escape her musical world by boarding a yacht and sailing long distances. In 2006 she sailed non-stop from Torbay to Lisbon in the Tall Ships’ Race, and she is a qualified Day Skipper.

If you know a 12-17 who wants to take part, make sure they fill in the permission form: #shootingrootsvirtualsummer #free #online #youth #folk #workshops twitter.com/ShootingRoots/…

About 3 weeks ago · reply · retweet · favorite

I'm running a couple of FREE online ceilidh dance calling workshops for 12-17 year olds this weekend as part of the #shootingrootsvirtualsummer Please spread the word if you know anyone who'd be interested! There will also be music and song workshops - see below. pic.twitter.com/PdgzBV13k1

About 3 weeks ago · reply · retweet · favorite

Sad not to be maypole dancing this weekend! Maybe I'll get my maypole out later anyway (even if the patterns aren't quite as good with just two of us!) . #MayDay2020 . BBC News - Coronavirus: Virtual maypole dancing in lockdown bbc.co.uk/news/av/uk-eng…

About 4 months ago · reply · retweet · favorite

RT @TheEFDSS Two months (it feels like a lifetime) ago, our Folk Educators’ Group presented a development day for social dance callers. Here’s a lovely review by @alisonrowley efdss.org/about-us/what-…

About 4 months ago · reply · retweet · favorite

About 6 months ago · reply · retweet · favorite